Base Training - An unforgettable day

NOTICE / DISCLAIMER:
The cockpit photos in this blog post were taken in such a way to not interfere with the safe operation of the aircraft. These flights are training related and therefore no passengers were on board. Photos showing me in the right hand seat were taken by coursemates whom were off-headset and therefore not of a distraction to me.

Quick, someone pinch me... 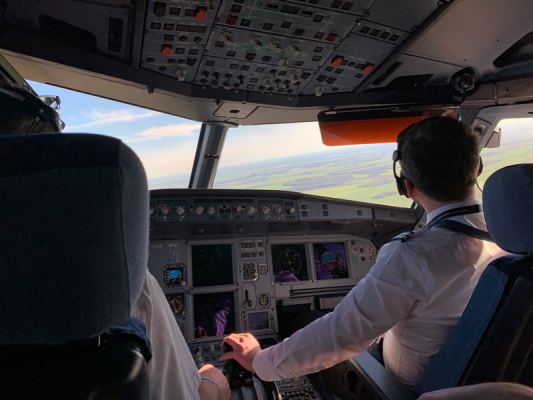 * My first time at the controls over France *

As a child I used to play Microsoft Flight Simulator and - with an interest in easyJet fuelled by my somewhat obsession with the "Airline" TV show on ITV - I often selected to fly in easyJet liveried aircraft in-game. I'm sure many of you frequent readers will already know that, however, little did young George know that on the week of his 25th birthday he'd put on that same airlines' uniform, board that same airlines' aircraft - although arguably a lot newer as easyJet flew Boeing aircraft back then - and be given the chance to fly it in the South of France. Simply writing this paragraph is bringing back the same smile I had on the day. There's nothing like it!

* Our steed for Base Training, G-EZBF *

Following our induction and initial sim sessions in Gatwick we were rostered a few days off prior to the base training day itself. You could probably imagine the excitement levels building within me in the lead up. I was so ready!!! - but I was full of nerves too.

With everything I've described so far in I'd like to ask you to imagine the smile on the face of a guy who'd only ever wanted to fly a jet and who on the 12th of March 2019 was given the opportunity to board the plane and turn left instead of right. With any luck the smile you're imagining might look a bit like this...

...that same smile stayed with me a few days after too!

On leaving the crew room at Liverpool Airport and walking out to the aircraft for the first time I recall thinking to myself that the aircraft looked much bigger than I ever remember it being. That may seem a silly statement to make, but you need to bear in mind that this was the first time I was looking at this aircraft from the mindset of a pilot as opposed to a passenger. If anything I had a "How on earth does this thing fly?" moment in awe at the scale you can never really appreciate from within a simulator. To give you an idea of what I mean... the main tyres on this thing are as tall as my knees, you can walk under the belly of the fuselage without really needing to duck and a single engine is over 2 metres tall. I just couldn't wait to have a go!

Not the nicest of weather...

* Much nicer than the bleak old English weather *

The view out of the window on the way down to Nîmes was beautiful. The snowy alp peaks could be seen in the distance and Southern France looked really warm compared to back home. Barely a cloud in the sky. Midway through the flight the Captain called the first of my coursemates up to the cockpit. His base training was to start from that point onwards and so he switched places with the safety pilot and took control of the aircraft from our cruising altitude right down to touchdown. He went on to complete his six touch-and-gos successfully and returned to the cabin with a HUGE grin on his face.

Once a trainee has completed their circuits they land and taxi back to the holding point for the same runway where you then switch over with the next in line. Generally the airports chosen for base training are so quiet that you'd not be holding up any other aircraft in doing this so its' quite an efficient operation with each trainee taking about 45 minutes to complete the required touch-and-gos.

Nipping down to Nice... 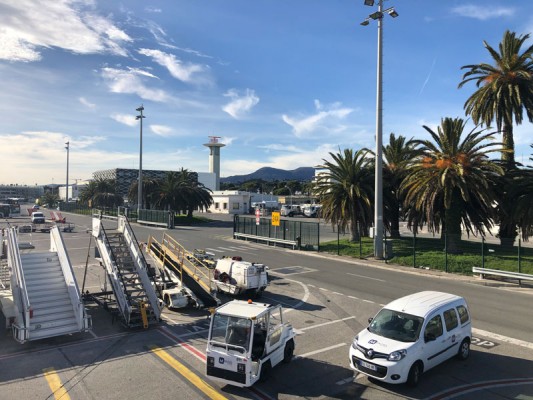 Half way through our base training day we were required to fly to Nice before returning back to Liverpool. This unfortunately meant that I and my remaining coursemates were unable to complete the rest of the circuits. It's unusual for this to happen on your typical base training session but I suppose it's an insight into the ever dynamic airline industry. Having topped up the excitement and adrenaline levels I felt incredibly deflated to not have flown the aircraft but with our CAA licence appointments looming I had confidence we'd be rescheduled before long. On the plus side I got to sit in the jump seat on the way home. It was night-time too and, miraculously, the weather over the U.K. had improved which made for some superb views as we flew over central London. 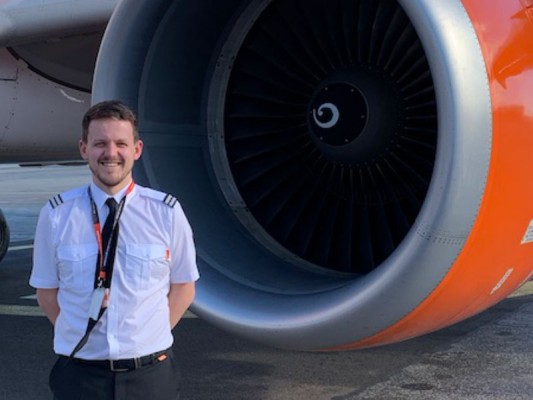 It wasn't too long before the training team managed to reschedule us and on Saturday 16th March we were back in the air. The spare aircraft happened to be in Stansted this time (G-EZBI) and we were provided transport to get there. In typical British fashion the weather was once again poor so we departed toward Châteauroux, France, yet another beautiful and picturesque location. We kept the order of trainees exactly the same as it was on the Tuesday which meant I was last to fly. Those who had already flown did not need to fly again and were not present on the second day. 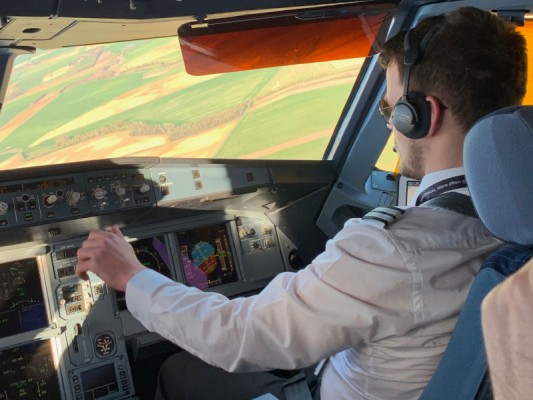 * The wait was certainly worth it! *

It was awesome to watch peers you'd trained alongside go on to realise they'd finally reached the point of their childhood dreams. The smiles on each of their faces were honestly hair raising. You know when you hear an incredible singer and it gives you the chills? Well, hearing the guys describe their experience through their enormous grins and happy giggles gave me just that. I couldn't wait til my turn but as time went on I started to get butterflies in my stomach. I distracted myself from that by tucking into the crew food and enjoyed the views in the meantime. Also; there's something about hearing those mighty CFM engines roar with each application of FULL takeoff power that simply couldn't grow old. 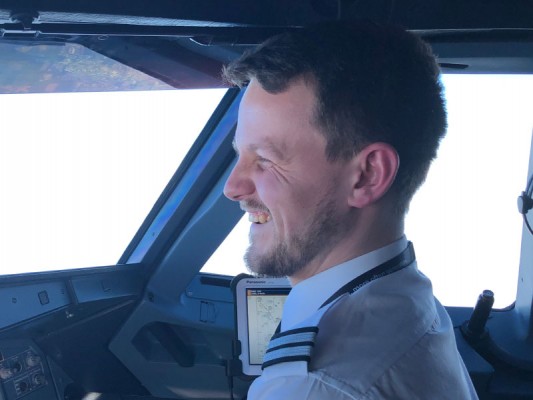 * Flying an Airbus for the first time *

Eventually though... my time arrived.

Walking into the real cockpit as the pilot for the first time and not as an overexcited child exploring post-flight was a different feeling for sure! Climbing over the centre pedestal to get into my seat, adjusting the seat to the correct height and popping on my sun glasses I then and only then took a good look out of the window. There was not one single simulated visual to be seen... this was the real deal! My heart was pounding and my palms slightly sweaty with nerves, but in a good way. I took a large deep breath, exhaled and responded to the captain saying "Let's do this!".

The training captain gave me the usual and expected briefing of the events ahead before asking the tower for permission to enter the circuit. A moment later the controller came back to us "Easy 9802, take-off your discretion Runway 21, winds 210 degrees 25 knots, Report next final". The captain read back our clearance and without me even being told to - having gone straight into the standard operating procedures from the type rating - I taxied onto the runway, spooled up the engines to 50%, and then to takeoff power detent.

I remember thinking that the engines took a little longer to spool up compared with the simulator but my goodness once they had the feeling of thrust was exhilarating. I couldn't actually believe I was sat there at the controls hurtling down the runway about to take it into the air. The photo above of my smile sums this moment up perfectly.

I'm pleased to say that there were no issues with any of my approaches or landings for that matter. Those items the captain had to say were small debrief items but after six times around the circuit that was me done. That wasn't it though as going last I was given the added bonus of flying the aircraft back to Stansted. Sadly I wasn't able to fly the approach and land as the wind limits were outside of those accepted as safe for a first officer and so the Captain and Safety Pilot resumed normal operations in that sense. The views from altitude were so impressive!

What an incredible week. I turned 25 and realised my childhood dream!

I've a few days off now before I complete what are known as supernumerary flights. A supernumerary flight is one in which I join a normal crew to shadow their typical day at work from the jump seat. I have two days of supernumerary flights back-to-back meaning that by the end of day two I will have had the opportunity to observe 8 sectors. I am very much a visual learner and so seeing colleagues carry out their procedures will be very beneficial. I'll be shadowing a trip to Geneva and Berlin on one day and Geneva and Amsterdam on the next. I'm very much looking forward to it.

Once the supernumerary's are complete the next flight will then be my first passenger service. The first 50 of these flights are known as line training whereby we (cadets) fly with Training Captains. The first 12 of these also require a safety pilot on the jump seat as an extra set of eyes and ears assisting the captain in our earlier days of exposure to the airline operation. At the completion of these 50 flights I will have two check flights to complete. The first will be a competency check and the second a line-check and if both of these checks are passed I'll be released from under the wing of the training department to "Fly The Line" with non-training Captains.

I'm under no illusion that the next month or two are going to be very intense as I get to grips with the fast paced environment that is commercial air travel, but I'm ready to get stuck in!

Blog wise - I'll try to post some content in the coming weeks once I settle into the role.

Be among the first to see my latest content.

What did you think of this post? Join the discussion below.

Check the FAQs!
Read FAQs
Get in touch!
Send me a Message Send me an Email